During drupa 2016, EFI and Esko announced that they have signed a letter of intent to bring a combined workflow solution to market that will enable companies to produce packaging with a single seamless and integrated workflow.

EFI and Esko intend to develop a unified workflow for digital printing of packaging using EFI’s Fiery DFE combined with Esko’s workflow automation platform. Commercial printers that want to offer folding carton or label printing to their customers using their digital presses will enjoy the benefits of this solution. In addition, this combined offering will be integrated to EFI’s industry-leading ERP/MIS and Web-to-Print solutions to provide a seamless end-to-end workflow from design to delivery for commercial print customers.

“We’ve heard from many of our commercial print customers that their existing workflow tools, most of which were purchased with a CTP device, are just not flexible enough to help them expand the vast opportunity in digital packaging production,” said Toby Weiss, SVP and GM, EFI Fiery. “Packaging is a key area of growth for EFI and our customers and many of our Fiery partners now offer great digital printers that are suitable for packaging production. We believe a Fiery and Esko combined solution will be the best way to meet this need in the packaging workflow space.”

“By combining the expertise and technology of two undisputed market leaders, EFI and Esko, we believe together we will offer a great solution for companies that want to enter packaging, as well as those packaging companies that already have an Esko workflow and want to get into digital printing,” said Bernard Zwaenepoel, SVP, Software Business, of Esko. 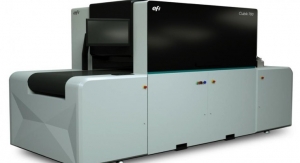 AVT to be Acquired by Danaher’s Product Identification Platform