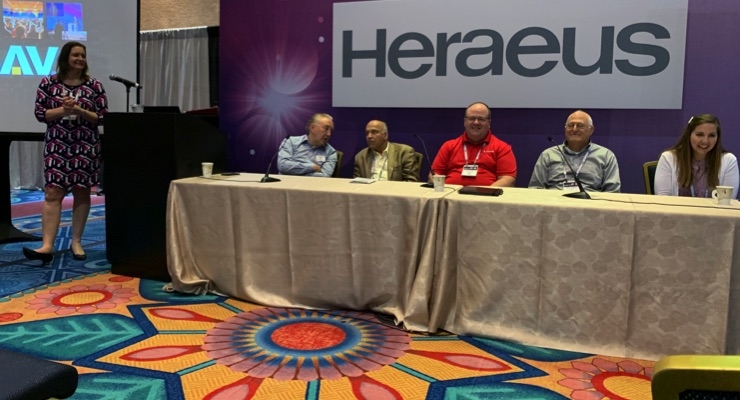 UV, UV LED and EB curing are enjoying growth in paint and coatings, graphic arts, industrial and 3D applications. These are being led by environmental and performance aspects. There are, however, segments that are being held back by concerns over the technology.

RadTech UV+EB 2020, RadTech International North America, The Association for Ultraviolet and Electron Beam Technologies’ biennial show, is being held at Disney Coronado Springs in Orlando, FL. In an effort to provide information on the benefits of UV and EB technologies, RadTech 2020 featured a number of panels looking at concerns.

One such panel was Electron Beam Mythbusters, a look at some of the misconceptions about EB technology. Todd Fayne of PepsiCo served as moderator for panelists James Nowicki of Henkel Corporation, Brian Sullivan of Energy Sciences, Evan Benbow of Wikoff Color and Karl Swanson of PCT Ebeam and Integration.

Fayne said that one of the things everyone starts with is the cost, noting that EB equipment runs up to $2 million, and inks and coatings are expensive.

“From the end-user perspective, we try to get the operating cost to cost parity,” Fayne added. “You have to look at it from a total cost perspective. We can drive lots of productivity to new substrates we can use for our packaging, for example, single layer instead of lamination. EB enables that.”

Benbow observed that EB inks do have performance benefits to consider.

“ The cost of EB inks are much higher on a per pound basis, but they are 100% solids inks, so we get a lot more active materials, as well as casting a much thinner ink film, so you are using much less of it. Also, can we assign value to no longer putting VOCs in the environment – you can’t truly quantify that,” Benbow said. “The ability of EB to create strong crosslinking gives it stronger performance capabilities.”

“EB is a high cost, but what are the costs of operation, what are you getting for the investment,” Swanson noted.

“With EB you have an upfront cost on the first foot of width, but when you draw that width out, you get more competitive with UV. You also can run faster,” Sullivan noted. “When you look at flexible packaging, we can go into an account and talk all day about the benefits of food packaging. EB does not have any photoinitiators. It’s driving interest in this technology.”

Fayne noted that the use of EB is not prevalent, but it is growing. “With EB, there is not a lot of installed capacity but that is changing,” he added.

“There’s a lot of solvent flexo presses installed around the world and without legislation, it will be a slow change in packaging,” Swanson pointed out.

EB offers advantages when it comes to sustainability and regulations.

“Leadership from CPGs are certainly a driver, but regulations are also important,” said Nowicki. “Analytical techniques are getting more sensitive. Consumers get nervous when they hear about trace amounts of chemicals.”

“We’ve been doing testing on deinkability and plastic recycling, we have been taking these to caustic washes ad it is separating quite well with minimal staining,” Benbow said. “We have seen very promising behavior with regards to plastics. It does not break down into sludge but rather into flakes. There is a lot of movement toward transparency being generated along the supply chain. We want to know everything that is in our material, and then provide it to our customers.”

“I want to get a non-detect,” Fayne concluded. “We have a lot of exposure as a brand owner if something goes wrong. We need to get the ink in the ballpark on price with solvent-based ink. Changing the substrate is a savings, and no clear film needed with surface printing.”

“Trends in UV+EB Inkjet for Packaging,” a panel discussion on packaging inkjet featuring UV and EB curing, was moderated by Jennifer Heathcote of Eminence UV. The panel featured James Gill of Fujifilm Dimatix, Imtiaz Rangwalla of Energy Sciences Inc., Tom Molamphy of Siegwerk, Josh Samuel of EFI and Vivien Clayton of Sartomer Americas. The panelists began by discussing where inkjet packaging is, noting that direct food contact is not happening.

“What is good from a migration perspective is that whatever the ingredients for UV or EB, you are doing in-situ,” Rangwalla said. “We have to comply that these migration limits are met. After I cure it by established guidelines, they have to meet the migration limits.

“UV will never be accepted for direct for packaging,” said Molamphy. “It depends on barrier properties. If it is one-layer packaging, the question becomes whether you have an ink that meets the various lists, or is it corrugated and you can use regular ink sets.

“I don’t think that UV inkjet would be approved for direct food packaging. Moving from solvent-based to water-based in flexible packaging occurred very slowly,” Molamphy added.

“There are cases where corrugated does touch the food,” Samuel noted. “There is also set-off that has to be paid attention to.”

Gill noted that some brands are not ready to go to digital.

“I also think that digital is help to a higher standard than analog printing,” Gill added. “Digital is good at creating short runs of a hundred. The closer you get to the food, it becomes more of an issue.”

“EB eliminates the photinitiator,” Rangwalla noted. “That’s the advantage. EB has traditionally been chosen for food packaging for that reason – it takes away that risk of migration. EB also provides a higher degree of cure, which also reduces chance of migration.”

Sustainability is a topic of importance.

“The question is what do the customers and end users want when it comes to sustainability, compostablility and recyclability,” Clayton said

“It will be driven by what our customers want,” Samuel added. “Consumers say they care but not so much. I think customers are driven by other concerns such as what it looks like and by ease of use.”

“The whole issue of plastic is a major concern in Europe. Paper is perceived as being a greener substrate, but it takes a lot more energy,” Molamphy noted.

All in all, inkjet is still not that prevalent in packaging.

“We are still in the baby steps for packaging,” Molamphy said. “If you look at installation of hardware in the last five years it is growing. There is also hybrid where you can do customization.”

“The technology is now coming of age and is really different – it is single pass printing and you need to run it reliably,” Samuel added. “You need camera systems to run in real time. All of these things are happening. They are running at real production speeds. Ceramic technology flipped completely in five years to inkjet. Packaging will go in different rates. The exciting market for us is corrugated right now. Analog will push back on flexible packaging.”

“There is a real compelling argument for going with digital, with different tipping points with different markets,” Gill said. “The billboard industry was done the same way for 100 years, and within seven years, every single billboard in North America was all inkjet. I don’t know if flexo will be the same. The way inkjet comes in is at the bottom and then becomes more efficient. It tends to creep up the break-even point, from 1,000 copies to 10,000 copies and more.”

There were also a number of sessions on a ode range of topics. In particular, the Industry 4.0 session featured speakers who analyzed how UV/EB can be tested. David Ivarsson, EFSEN UV & EB Technology, opened with his talk on “The Impact of Different Intensities on the Performance of LED Cured Coatings, Highlighting the Importance of Homogeneous Cure.” Ivarsson said that companies need to know their process window, and how the light source interacts with the formulation.

“Regular and thorough measurement procedures are key for a stable process,” Ivarsson noted. “LED systems are consistent but not constant. I-CAD is a powerful tool for automatic and continuous measurements of UV sources.”

Darrin Leonhardt, Heraeus Noblelight America, followed with “Application of Intelligent System Data to Curing Processes.” Leonhart discussed some use cases and concluded that sensor integration and implementation into industrial UV systems is viable.

“Strong dependencies in systems (UV equipment, light shield, air flow) are quantifiable,” Leonhart added. “Weaker dependencies are also important and can help avoid blind spots in process. Properly functioning sensors tell a story and we have to fill in the blanks. Growing capabilities in Industry 4.0 this is just the tip of the iceberg.”

“We measure to define a process and to invest in the correct system, and to stay within the process,” said Efsen. “ICAD is a sensor and software and can look at the full spectrum of UV light along the full length of the system. For wood furniture using seven UV LEDs, the benefit was uniform cure, which gives no gloss variations on product. Lamp output is continuously monitored, therefore maintenance is planned.”
Related Searches