Group revenue in 2019 at the previous year’s level. 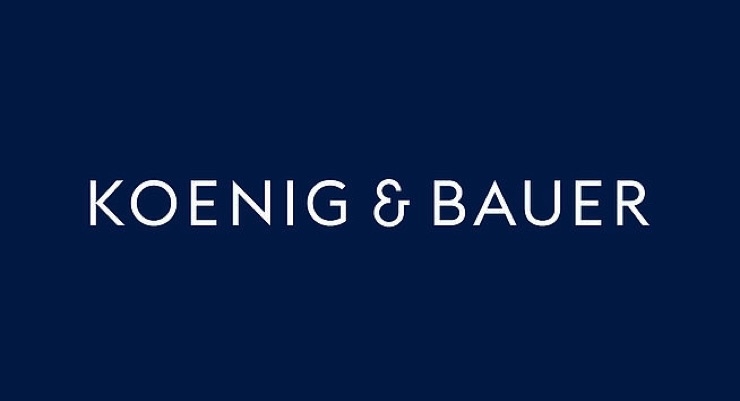 With its strategic focus on the growth market of packaging, Koenig & Bauer is on track to reduce the dependency on politically volatile und lumpy security printing business by increasing revenue and earnings in this area, according to the report.

Through the acquisition of Iberica and Duran, the joint venture with Durst as well as various partnerships in the software field, the portfolio for packaging printing markets was expanded further.

The machine is now producing in two shifts at the Klingele plant in Delmenhorst near Bremen, Germany.

After the sixth press sale for digital decor printing and the order from Tetra Pak for digital full-color beverage carton printing, the RotaJET digital printing platform is particularly successful in the market. The service initiative launched in 2016 is also bearing fruit. The service revenue share in the Koenig & Bauer group increased significantly from 25.9% in the previous year to 28.2%.

“The end markets we address are fundamentally intact with packaging printing showing good structural growth," CEO Claus Bolza-Schünemann said. "However, growth requires normal business years. Due to the increasing economic uncertainty, we decided to invest significantly in reducing manufacturing costs and to join forces more strongly within the group. With these measures, we aim to position ourselves to a greater extent independent of the economy and more competitively for the future.”

“With the Performance 2024 program, we are currently targeting reducing costs by over €70 million by 2024 with one-off costs of €30 million to €40 million," said Dr. Andreas Pleßke, the Management Board member responsible for the Performance 2024. "We expect the package of measures to be expanded further. The focus of the various projects aimed at optimizing group-wide structures and processes is considerably reducing manufacturing costs to achieve a significant improvement in the earnings situation in the new machine business. This includes design-to-cost projects, purchasing optimizations and some further measures. Bundling tasks as shared services as well as the reduction of holding costs and SG&A expenses are also on the agenda.”

"In addition to shorter delivery times, this will lead to a drop in working capital and a cash flow improvement," the CFO continued. "Moreover, we work with further activities and a sophisticated controlling of all measures with permanent monitoring on the significant reduction in working capital. We see considerable potential for improvement, particularly in security printing in terms of inventories and receivables through optimized sales management and stepping up export financing. The comprehensive package of measures also aims at more even distribution of revenue over the year in the Sheetfed segment.”

Business performance in 2019 in the Koenig & Bauer group
Not all expected orders in security printing and metal decorating were awarded in 2019, therefore order intake and order backlog of €1,141.3 million and €533.7 million respectively were below the figures for the prior year (€1,222 million and €610.9 million respectively) favored by the major Egyptian order.

In view of the significantly increased uncertainties caused by the corona crisis, the Management Board and Supervisory Board will propose to the annual general meeting to suspend the dividend payment for the financial year 2019 and to carry forward the retained profit generated by the holding company Koenig & Bauer AG to a new account.

The fundamental policy of distributing 15% to 35% of group net profit remains unaffected.

In Digital & Web, order intake of €144.9 million was 18% below the prior-year’s figure of €176.6 million. In addition to the shrinking web offset service business, lower orders in flexible packaging printing were the main reason for this decline. Revenue increased by 7.4% from €153.3 million to €164.6 million. On balance, the order backlog decreased from €85.8 million to €66.1 million at the end of 2019.

The EBIT of –€16.5 million (previous year: –€10.2 million) was burdened by high market-entry and growth-related expenses as well as the negative result in flexible packaging printing.

In the Special segment, order intake of €406.7 million was below the prior-year’s figure of €505.1 million, which was impacted by a major order in security printing. After €491.5 million in the previous year, revenue of €463.9 million was achieved. Order backlog at the end of 2019 was €287.3 million (Dec. 31, 2018: €344.5 million). As a result of the lower revenue, product mix and unexpected project expenses for the major security printing order, EBIT amounted to €43.9 million after €48.2 million in the previous year despite one-time income.

Above-average balance sheet ratios
In addition to the high investment expenditures and the dividend payment, cash flows were influenced by one-time effects such as the significant capital lock-up resulted from the major Egyptian order.

Accordingly, cash flows from operating activities of –€7.9 million and free cash flow of –€52.3 million were below the prior-year figures (€66.3 million and –€19.5 million respectively). The long-term credit facility syndicated by renowned banks is strengthening the group’s stability. In terms of balance sheet ratios, the Koenig & Bauer group is well-positioned with an equity ratio of 34.3%.

“Even before the outbreak of the coronavirus, global economic conditions were demanding," Dähn said. "Given the daily worsening global economic situation due to the coronavirus, the impacts on our company and the achievement of our planning are currently completely open. For 2020, we are planning to achieve a largely stable group revenue compared to the previous year and the prior year's EBIT level without the around €10 million in special expenses from the efficiency program. Managing the possible consequences of the corona crisis is currently a top priority.”
Related Searches
Related Knowledge Center