Huhtamaki CEO Jukka Moisio said that 2016 was another record year for Huhtamaki.

“Our net sales and profitability reached all-time-high levels and met the mid-term ambitions set in early 2015,” Moisio reported. “Our net sales were €2.9 billion, Adjusted EBIT margin strengthened to 9.4% from previous year’s 8.7% and adjusted EPS grew by 11% to €1.83.

“Our comparable growth was 4% overall and 7% in emerging markets during the year,” Moisio added. “Development was good in North America, where our past investments delivered in a growing market. Foodservice Europe-Asia-Oceania and Molded Fiber segments progressed well throughout the year. Challenging trading conditions in many African countries and the demonetization action executed in India in November 2016 burdened Flexible Packaging net sales.

“During the year we made significant forward-looking growth investment decisions that help our customers serve their markets better,” Moisio concluded. “The most significant of those decisions was to build a manufacturing and distribution facility in Goodyear, AZ to service customers on the US west coast and southwest. In addition we’re investing in new facilities in Egypt and India, and expanding our current site in China.”
Related Searches
Related Knowledge Center
Suggested For You 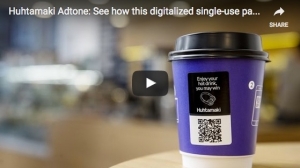 Koenig & Bauer on a Growth and Profitability Trajectory in 2016