Statutory profit for the half-year was $286.6 million.

Returns, measured as profit before interest and tax to average funds employed, was 19.2%;. while operating cash flow was $52.9 million.

“Amcor has delivered a solid half year result and the full year expectation for growth in profit after tax remains unchanged,” said Ron Delia, Amcor’s managing director and CEO. “Our business remains very well placed for the current global environment and for the long term.

“Growth in PBIT and EPS was 3.5% and 4.6% respectively in constant currency terms,” he added. “More importantly, the business delivered PBIT growth of 9% and EPS growth of 12% in constant currency terms after adjusting for Venezuela, where we have eliminated our financial exposure.  The result illustrates the defensiveness and resilience of our unique global packaging business and our strategy.  Earnings growth was balanced across the Flexibles and Rigid Plastics segments, and came from both organic sources and recently acquired businesses.

Amcor operates more than 200 plants in more than 40 countries.

“The half year also demonstrated the benefit of our broad geographic diversification, including having a presence in every major region around the world,” Delia noted. “Across our diverse footprint, we saw growth in developed markets this period offsetting challenges in some emerging markets.

“We also took important steps against our strategic priorities, moving quickly with clear alignment through the whole business,” Delia concluded. “In the last seven months we invested in the large scale Alusa and Sonoco acquisitions as well as in the Flexibles restructuring initiatives. Relative to the 2016 financial year, these investments will underpin more than US$150 million of PBIT growth over the next three years, in addition to organic growth and further M&A.” 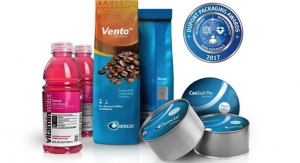