For any family-owned business, reaching 60 years is a remarkable achievement. As industries change, companies have to change along with their customers or perish. For Grand Rapids Printing Ink, changes come in many forms, from adding new product lines to expanding operations into new regions through acquisitions. “If you’re not changing and evolving, you’re dying,” said GRPI president John Toigo. Started by Roger Funghi, Toigo’s great uncle, in October 1954, GRPI began manufacturing inks in the basement of a building in downtown Grand Rapids. In 1962, Bob Toigo moved to Grand Rapids from Connecticut, and a second generation began assuming a key role in the family business. Bob Toigo continued the company’s success and acquired majority ownership of GRPI in 1995, retiring in 2002 and turning over the company to the third generation of family ownership, led by John Toigo. Toigo, who had joined the company full-time in 1993, has overseen tremen 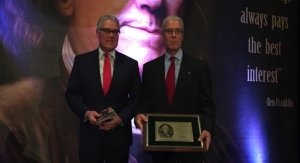