At the beginning of May, a second rPET extrusion line will be going into operation at the PET recycling plant in Radomsko. 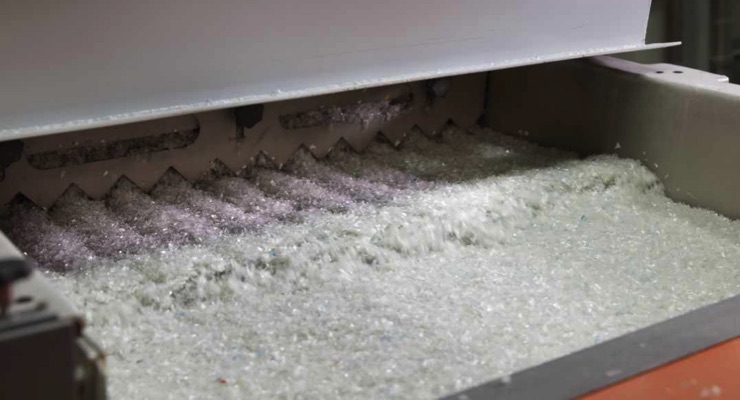 A new rPET extrusion system will be going into operation in early May 2020 at the recycling plant PET Recycling Team in Radomsko, Poland.

Georg Lässer, head of Recycling at ALPLA, explained this new development and more.

"A key target is the expansion of recycling activities by 2025," he said. "Anyone who follows ALPLA on any of the company’s various channels is bound to have read or heard this sentence several times recently," he said. "At the end of 2018, we signed the New Plastics Economy Global Commitment – an initiative of the Ellen MacArthur Foundation – which, amongst other things, commits us to invest a total of €50 million in pursuit of this aim.

"We take this voluntary commitment seriously and have initiated several international projects, such as the construction of a recycling plant in Thailand. We are also investing in the expansion and improvement of our existing recycling plants. We aim to process even more recycled material for the bottle-to-bottle cycle and make the production processes at our recycling plants more sustainable by means of modernization."

At the beginning of May, a second rPET extrusion line will be going into operation at the PET recycling plant in Radomsko.

The 90 employees at PET Recycling Team Radomsko produce 30,000 tons of flakes a year from post-consumer material.

Of this figure, 15,000 tons a year has thus far been extruded to produce regrind material. With the new system, the capacity will increase to 30,000 tons a year.

"As a result, we are doubling the capacity for high-quality rPET, which can then be fed back into the bottle cycle. Downcycling (e.g. the use of flakes to produce film or their deployment in the textile industry) will largely be avoided," Lässer said. "Instead, 30,000 tons of regrind material will now be used solely to produce new packaging units for European customers – in keeping with the bottle-to-bottle principle. What’s more, all the input material – known as ‘post-consumer material’ – also comes from Europe, i.e. from Poland and neighboring countries.

"The new extrusion system itself is supplied by Austrian firm Starlinger, whose cutting-edge recycling technology ALPLA has been using for many years."

In addition to the technical expansion of the plant, its energy supply has been switched fully to renewables.

As an international developer and manufacturer of plastic packaging, ALPLA recognized the importance of recycling at an early stage and was already entering into partnerships in the early 2000s.

The acquisition of Austrian company PET Recycling Team Wöllersdorf in 2010 and the construction of an in-house recycling plant in Poland in 2012 were milestones on the evolution of ALPLA into a recycling specialist.

However, the demand for recycled plastic has not always been as high as it is today.

"When the plant in Poland opened its doors in 2013, this was certainly the case, particularly in this region," Lässer said. "Back then, there was hardly any awareness amongst consumers and customers regarding the recycling of used materials. Nevertheless, our experts designed the plant with foresight, enabling it to be upgraded quickly and without further construction measures. This approach is now paying off."

"Over the years, PRT has held its own in a challenging market environment, helping to ensure that PET packaging units are seen as recyclables. Our market is now ready and, with the new set-up, we are in a strong position to make high-quality regrind material in the most sustainable way possible," said Beata Szynkiewicz, commercial director at PRT Radomsko.

"By using green electricity, we are, in my opinion, taking the logical next step in our strategy," added Marcin Jablonski, plant manager, PRT Radomsko. "We are transforming used materials into recycled materials in the most energy-efficient way possible for the industry, helping to ensure a functioning circular economy, preventing litter, and, at the same time, contributing to the fight against climate change."