In 2003, Buhler Group acquired Draiswerke GmbH, Germany, a key move that brought with it strong technology and personnel. At the time, Draiswerke, Inc’s North American operations remained separate from the deal. At the end of 2010, Buhler Group announced the acquisition of Draiswerke, Inc, which will strengthen the company’s presence in the U.S.

Buhler will now utilize Draiswerke’s Mahwah, NJ headquarters as the home of its Grinding and Dispersion (GD) unit, which offers solutions for manufacturing electronic materials, printing inks and paints, fine chemicals and products used in other industries.

Gisbert Schall, the current president and CEO of Draiswerke, Inc., will retain his function up to mid-2011. Buhler is in the process of integrating all of the members of the former Draiswerke Inc. to this new Buhler GD team. Buhler Group has named Steve Jacobson as the new general manager for GD North America. Mr. Jacobson brings many years of Buhler experience into this experienced team. He will soon also announce the new GD team, which will serve and support all of Buhler’s North and South American customers.

Rene Eisenring, sales manager, GD for Buhler, said that the market has been the biggest driver for acquiring this final piece of Draiswerke in the U.S.
“Over the last 10 years, the Buhler Group has grown from a 1 billion CHF to a 2 billion CHF company,” Mr. Eisenring said. “This growth was mainly fueled organically by adding new products, processes and offering services and externally enhanced by making strategic acquisitions such as Draiswerke. Buhler has been very selective with these acquisition targets over the last few years, making sure each filled in essential areas of our product portfolio both in our food and non-food businesses.

“By purchasing the New Jersey Draiswerke location, the Buhler Group now completes, full circle, the entire purchase of the worldwide Draiswerke organization,” Mr. Eisenring added. “We are so happy to welcome the team of Draiswerke Inc. in Mahwah, NJ, to the Buhler Group family, and to give to this segment of our Buhler business a much bigger and better footprint in North America.”

Mr. Eisenring noted that the integration has started and is in full swing.

“We will soon move the GD division to Mahwah, NJ,” Mr. Eisenring said. “This will now be our Buhler GD headquarters for North America. Buhler will invest in this new location, which will offer a dedicated facility of 35,000 square feet with a new Lab & Testing Center, a combined spare parts inventory, which will be double in size, a new assembly shop with expanded equipment rebuilding center, and updated infrastructure and offices.”

Mr. Eisenring noted that the new organization will first concentrate on providing even better value and support to its established markets such as the ink, coating and electronics and its existing Buhler and Draiswerke customers. Once the integration is completed, Buhler will then be in a better position to enter new and growing markets and applications such as cleantech, energy, solar, batteries and clean water technology.

“The benefits to our North American customers will be huge, but will also be felt on a global basis,” Mr. Eisenring said. “We will be able to better serve U.S. corporations, which also have locations in other countries around the globe, with the same support and equipment. In North America, the combined wealth of know-how and the many years of experience the two established companies offer will be unmatched.”
Related Searches
Related Knowledge Center
Suggested For You

The Milling and Mixing Report

Grinding Media Manufacture: Some Problems Can Be Quite Visible 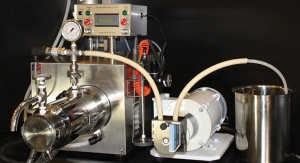 The Milling and Mixing Report

The Milling and Mixing Market